What’s the difference between angularjs and angular? 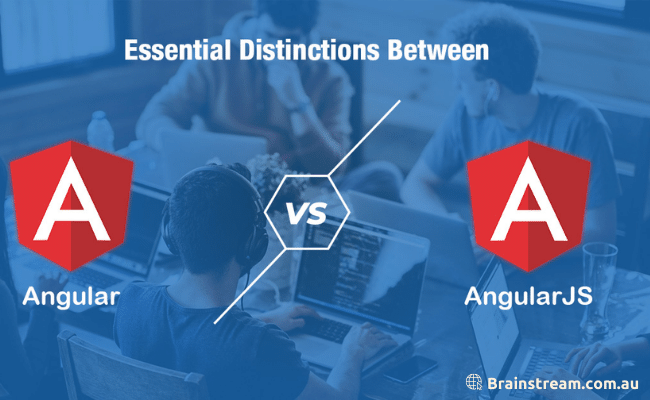 Before we get into that, let’s first get a better understanding of Angular and AngularJs on their own.

About Angular and AngularJs

Angular is an alternative to AngularJS that is based on the programming language Typescript and is used to create dynamic web applications. The version that has been improved is the one that is used the most these days.

When compared with AngularJS, it is significantly faster, has a more advanced modular design, and is extremely simple to develop. These are just some of the key features of the framework.

The open-source, single-page applications development framework also comes with its own one-of-a-kind features, such as the capability to transform static HTML into dynamic HTML. It comes pre-loaded with a variety of filters and directives to choose from.

Components are given a significant amount of responsibility in the construction of user interfaces while using Angular. The user interface is broken down into its individual parts, each of which is referred to as a component.

Component directives are used in AngularJs to accomplish this task. These directives define each and every Angular component, including but not limited to templates, input/output bindings, and so on.

These directives have advantages over lower-level features such as ng-include, scope inheritance, and other similar features.

It is possible to migrate an AngularJS component directive to Angular with little effort; all that is required is a few configurations. Among these are the following: restrict: ‘E’, scope:, and bindToController template or templateUrl, controller and controllerAs, as well as the tilde symbol.

The Angular framework relies heavily on the use of components such as structural directives and attributive directives, both of which are packaged with respective templates.

The former is employed in the alteration of the DOM layout. In order to accomplish their goals, structural directives swap out existing components with new ones, whereas attribute directives alter the way that the elements look.

The strategy that Angular takes divides functional and logical components according to their objectives so that the application receives better service from these subsystems.

On the other hand, Angular JS is based on the model-view-controller (MVC) architecture, in which it plays a major role as the Controller in storing data and rules, collecting input, and converting it into instructions that are then delivered to the Model and View. In addition to this, it manages the behaviour of programmes.

The Model is in charge of keeping and managing the data that has been received, and the View is the one that is responsible for outputting the data once it has examined the information that is included in the Model.

MVC is a straightforward and coherent framework that makes the development process go more quickly. Because of the binding functionality, you will also need to write far less code.

In contrast to AngularJS, which makes use of directives rather than DI, Angular implements performance optimizations in the form of a hierarchical DI framework.

Therefore, what distinguishes Angular vs angularjs, and vice versa? To begin, Angular is constructed on top of TypeScript, while AngularJS is built on top of JavaScript.

TypeScript is backward compatible with ES5, in addition to being a superset of ES6. Angular also offers some of the advantages of ES6, such as lambda operators, iterators, and the framework for Reflection.

There are several directives available in AngularJS, and each developer has the ability to additionally provide a custom new directive.

Standard directives are available in Angular as well, although their application is quite distinct from that of other frameworks.

For instance, with AngularJS, using the ng-model directive indicates that you wish to construct a two-way binding. Use the ng-bind function if you want to build a binding that only goes in one direction.

Angular only uses ngModel, but if you write it like this: “[]”, you’ll get one-way binding instead of two-way binding.

You need to enter it in like this: “[()]” if you want to build a binding that works in both directions. Because “[]” is used to bind properties, and “()” is used to bind events, we are required to express it in this manner. The reason for this is as follows Some of the directives in Angular have had their names altered, such as ng-repeat being renamed ng For.

When I first began working on projects using the beta version of Angular 2, I made some of the more frequent errors at the beginning. For example, I would attempt to use ng-repeat or ngModel solely in square brackets even though I needed two-way binding.

Other than that, what else has changed?

If the latest version of Angular is released, it is reasonable to assume that it offers improvements over the previous release. That’s accurate, Angular offers a wide variety of benefits. The first one is the ability to be modular.

A significant portion of the functionality of the core was relocated to other modules. Because of this, the core was simplified, making it lighter and quicker, and dynamic loading, asynchronous template compilation, and support for reactive programming were introduced. After the beta version was completed, the developers included a pretty excellent feature called angular cli.

Using that package, you will have a simple time building the scaffolding for your Angular project, which will already be setup.

The Angular framework is an excellent one. In terms of AngularJS, it contains a lot of new and improved features Android app development company

It will continue to grow in popularity, and in my opinion, it is ideally suited to both little and larger applications hence, it is definitely something that should be learned and used.

While we are discussing Angular, I would like to bring to your attention another framework called ReactJS. This framework is somewhat competitive with Angular, and I will elaborate on it more in the next post.